Thanks to Sandy Kemsley, I found Michael Zur Muehlen has published his very nice e-book online. No registration required so definitely have a look at it. Even though the book seems to be a couple of years old, it includes a thoughtful and still very relevant description of BPM as a discipline and the relation to BPM software technology.
Posted by Tom Baeyens No comments:

The jBPM Community Day on June 6th is starting to become a real international event with people coming from Belgium, The Netherlands, France, Germany, Italy and Ireland of course.

The program is updated and gives a good idea of what's going to happen. Also a list of hotels and activities is added (thanks, Paul!)

Don't miss it ! Be sure to registration quickly. It is as easy as sending an email to dublin@jbpm.org
Posted by Tom Baeyens No comments:

It seems to be a very stubbern misunderstanding that I have tried to straighten out many times before. But for those that didn't get it yet, even John Evdemon, co-chair of the BPEL technical committee said already in 2007 that BPM != BPEL and now in the recent BPMN discussion he adds: If you can do something it doesn't mean that you should...

Sometimes you can find good explanations of tech buzzwords in real life. So far, I found out what Ajax, SOA and backup really means.

If your HTML-over-HTTP-house is on fire, the Ajax hose comes to the rescue. 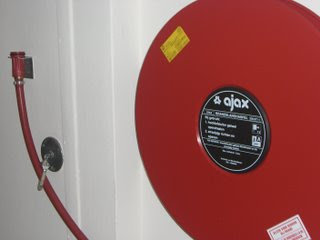 If your integration stinks like a sewage system, just put a SOA cover on it.

And a backup is even more vital then I ever imagined. 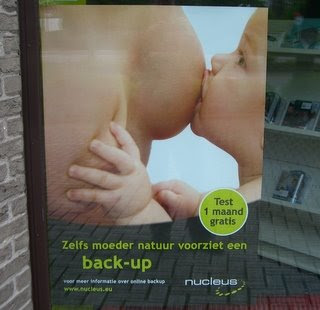 I'll translate for the non-dutch speaking: "Even mother nature provides a back-up" And in the round circle it says : "Test one month for free". Sign me up ! Sign me up !
Posted by Tom Baeyens 7 comments:

Boris Lublinsky posted a good overview on InfoQ about the online discussions around BPMN 2.0 and it reveals IMO a very profound problem in traditional BPM thinking.

One group wants to give the graphical process modelling notation executable semantics. In that case, a BPMN 2.0 diagram would specify exact (and hopefully portable) semantics and it can be executed on a computer system. On the other hand, some people raise concerns about the simplicity in that approach.

This again shows that today the dual nature of BPM is not enough recognized by BPM vendors. BPM tries to make the bridge between non technical business analysts and the implementation of a business process.

A business process analyis can contain a diagram and it expresses how people and systems work together. Such an analysis is targetted at other people so it can include free text and a diagram. It's description of how things work in the real world. Analysis can be done without even automation. An analysis is always an important input to express the requirements for the automation of a business process. Some analysts use very expressive diagram notations, while others just use boxes and arrows. But even in case a lot of details are expressed in the diagram, they are not necessarily expressing runtime execution semantics in the software sense of the word.

There are some aspects that cause some fog around this clear picture. In practice, it turns out that the roles are not that clearly separated. In fact, a lot of business analysts have technical knowledge so they already are able to think in terms of what it means to execute the software. Also, there are different levels of process languages. The more a executable process language targets to be general purpose, the more complex it will be and the more technical it will become.

If a diagram notation (like BPMN) wants to be used for both the analysis as well as the executable process diagram, it should limit the number of details that can be expressed. As analysis details don't match with technical details necessary for making the process executable. The more details that are exposed in the graphical notation, the conflicts will arise because of this dual nature of the process diagram.

Instead of embracing the dual nature of BPM, the InfoQ post outlines very well how two opposite camps have formed around analysis and implementation. Previously the focus of BPMN was on analysis only. It's much easier to reach consensus in that more limited scope. Now, the big vendors got involved and expressed a clear vision to make BPMN executable. That opens up the whole discussion of the environment. BPEL clearly chose for an ESB environment based on WSDL. But (just to give another example) jPDL is defined in a Java environment. I don't yet see how you can define an executable process language without selecting a concrete environment in which it operates. This is exactly why we support multiple process languages on our Process Virtual Machine.

The way things are moving now, the move towards executability of BPMN is starting to become clear. But looking further in that direction, I can only see quicksand. As indicated above, the vision of making BPMN executable could quickly be dragged down by many technical "details". It will be interesting to see how that is going to play out, but my fear is that it's not gonna be a smooth ride.

One thing puzzles me, though. Why is everyone talking about a new file format for BPMN 2.0, while there is XPDL ? The WfMC guys did a lot of effort to get XPDL synced up with BPMN and they made a lot of noise about it, so it cannot be an oversight. Still everyone seems to be silent about the possibility of using XPDL as the file format. Does anyone know more about the motivations for this silence ?
Posted by Tom Baeyens 12 comments: