The timing of the Alfresco Developer Conferences couldn't be better for Activiti. The one in Paris is October 20-21 and the one in New York is 3-4 November: Exactly around the time that Activiti 5.0 GA will be released.

I'll be speaking together with Joram about it and also Erik Winlof who started the Activiti Explorer and Activiti Probe web UI's is present so you can expect some nice demos and concrete insights.

Hope to see you there!
Posted by Tom Baeyens No comments:

Activiti And The BPM Market In A Nutshell

Too much happened to fit into 140 char twitter message so I decided to write the summary here, but first this side note: Elke delivered Joram 2.0 early (probably it will not be often, but hey...) He's called Lars. Congrats to the whole family!
Last release of August 1st already includes a decent coverage of BPMN activity types. Summer time is a great time to get some coding done. Last couple of weeks were really hard core coding with fine tuning of the core engine. We extracted the Process Virtual Machine as a separate module, added a super efficient event mechanism and optimized the DB persistence to the max. First of all, the runtime data is kept to a minimal, with minimal updates during process execution. On top of that, if a parallel gateway forks again, the joined executions are now actually recycled. It's good for performance and the environment! It's amazing that I still find significant optimizations after I've been coding core BPM engines since 2003.
Tijs Rademakers (from Open Source ESB's in Action) got started on a book called BPMN 2.0 with Activiti in Action. I already look forward to reading it.
Josh Long created an Activiti integration with Spring Integration. He's going to show it at JavaZone. Don't miss it.
Furthermore there is an Activiti BPMN 2.0 eclipse designer and an iPhone app in the pipeline. Really cool stuff. More about that later.
But what does that mean for the BPM market in general? Wel... this morning I was cycling to the office and I actually came across the perfect boat metaphors to illustrate what's happening in the BPM market. First I saw this:

That is a really good metaphore for the typical traditional BPM player: Inert, not in the shape that it once was but it's floating.
Then I passed along this one: 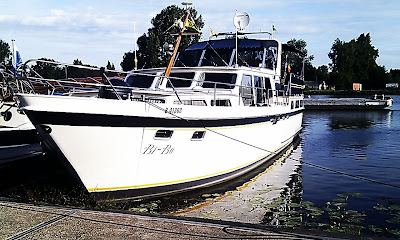 That's Activiti: New, fast, agile and fun to work with!
And then I saw what's going to happen with the traditional BPM players after Activiti the GA release in November:

We just released Activiti 5.0.alpha4. Joram published a very nice tutorial based on this release and also the following bullet item list:

Download the 5.0.alpha4 here.
Posted by Tom Baeyens No comments: