How To Send XA JMS Message On JBoss

It turns out that there is very little information about how to sending JMS messages as part of a JTA transaction using JMS API. Most examples on the web use false for parameter transacted in QueueConnection.createQueueSession(boolean transacted, int acknowledgeMode); in which case the message is sent directly and not at the commit of the JTA transaction.

So I was happy when I found Odi's article: JMS transactions with JTA in JBoss 4.

And from a quick look, there seems to be a lot of interesting developer content on Odi's site. Definitely worth a look.

At first sight, you might think that I'm just sharing this with the world to make it a better place. But actually I'm just adding this 1 link to google's pagerank so that I'll find it quicker next time I need it ;-)
Posted by Tom Baeyens 3 comments:

Amazing! Just a week after Devoxx, the talks were already available online. So if you were not able to come in person to Devoxx (only allowed with a doctors note:-), or if like me, you have spend all your time talking to people instead of attending the sessions then you can see still attend all the talks now on Parleys beta for only 49 EUR. If you ask me that is peanuts for a lot of great content that is still up to date.

It seems to be the jBPM book season :-) The new jBPM-Spring integration of jBPM 4 is explained in a new book called Spring Enterpriese Recipes. It's written by Gary Mak of the best-selling Spring Recipes and Josh Long, an expert Spring user and developer, Spring Enterprise Recipes is one of the first books on the new Spring 3.

Wow, that's some quick publishing! Just in time so that you can give these jBPM books as a xmas present to your wife, husband or partner ;-)
Posted by Tom Baeyens 1 comment: 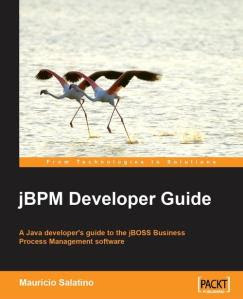 So fresh the ink is still wet. But no worries, there's also an eBook version of it.

Ronald finally gets due credits for his long term commitment and contributions to jBPM. Here's a ranking of top posters in all of JBoss community. To me, this is the real hall of fame. Respect! 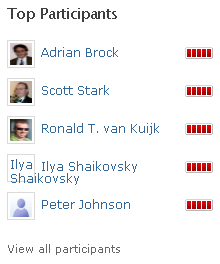 He's now in an awsome 3rd place only behind Adrian "MC" Brock and Scott "SX" Stark. Adrian and Scott are both one of the first JBoss employees and they basically wrote (and still write) JBoss. So being in that company as an external contributor is a major achievement.

And we're even more proud since you've accomplished this with mostly jBPM discussions.

Next month, jBPM will be the first open source process engine that natively runs BPMN 2 executable processes. BPMN 2 will be released as part of jBPM 4.3 next month (January 1st) Awsome ! And we got a lot more tricks lined up. Next months are going to be interesting.

A special thanks to our honoured community members Bernd Ruecker and Ronald van Kuijk for kicking off our BPMN implementation back in July. Congrats, Guys! Well done.

Joram Barrez already shows a complete preview with BPMN 2. Check it out !

Joram also created a wiki page full of usefull information on our BPMN language, including a description on how we position it against our jPDL language.
Posted by Tom Baeyens No comments: