Activiti 5.2, the rock solid BPM platform, was just released. This release adds following highlights:
Special thanks goes to Maciej Prochniak for contributing the visualization of the current activity in Activiti Probe. 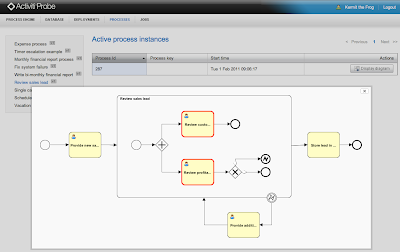 Also I wish to thank Christian Muelder for being available on a saturday to fix our hudson coninuous integration box hosted by Next Level Integration.
Camunda has received excellent feedback on their Activiti training. We recommend it!
And the special recognition in the order of Activiti for patience and perseverance goes to Tiese Barell on this 284 post forum thread! ;-)
Download Activiti 5.2
User guide documentation including 10 minute tutorial
Javadocs
Posted by Tom Baeyens